Two Exhibitions on Migration and Identity

Opening the 2017 exhibition season, Röda Sten Konsthall is pleased to present two separate solo-exhibitions: Asylum by Julian Rosefeldt and Protect/ Release by Hanne Nielsen & Birgit Johnsen. The two exhibitions reflect upon the connections between migration and identity, and ask how prejudice and social stereotypes continue to prevail.

The internationally renowned German artist and filmmaker Julian Rosefeldt will exhibit his first solo-presentation in Sweden to date. In the Cathedral of Röda Sten Konsthall, Rosefeldt will show one of his most celebrated and comprehensive film works: Asylum – an immersive and visually poignant 9-channel video installation. Through a series of films, Asylum sets out to examine and deconstruct the stereotypes associated with immigrant citizens, identity and labor.

The artist duo Hanne Nielsen & Birgit Johnsen are considered amongst the leading feminist pioneers of Danish video art. In their exhibition Protect / Release they are presenting two of their newest video installations - Drifting and Camp Kitchen, juxtaposing moments of fiction, documentary, media-discourse and feminist empowerment. Drifting reworks an incident from 2006, where a man was found cast away, alone on a wooden raft, and in the middle of the Skagerrak waters. The Swedish authorities and media were forced to speculate over the man's identity. In Camp Kitchen, unexpected kitchen scenes pop up, mixing potent elements of war, with cuisine and television.

Welcome to the celebratory opening of Julian Rosefeldt: Asylum and Hanne Nielsen & Birgit Johnsen: Protect/ Release on 3 February from 6pm–9pm with DJ, drinks and mingling. At 6:30 pm Director Mia Christersdotter Norman will welcome the guests, and then Curator Aukje Lepoutre Ravn will give an introduction to both exhibitions. Thereafter, artist Julian Rosefeldt will give an exclusive tour of Asylum. Throughout the evening DJ music and drinks will be served in Röda Sten Restaurant.

Julian Rosefeldt (born 1965, Munich) is a German film and video artist who lives and works in Berlin. Since 2001 he has been a professor of Time-Based media at the Academy of Fine Arts in Munich. Rosefeldt is known for his visually strong and vigilantly choreographed video installations, which draw inspiration from film, art and popular culture. They depict the once familiar but distinct worlds we inhabit, with both humor and political satire. Having shown extensively in museums and festivals worldwide, Rosefeldt's work is now a part of several renowned collections, such as Berlin's Neue Nationalgalerie, London's Saatchi Gallery, and New York's Museum of Modern Art. Rosefeldt has received international praise for his latest work Manifesto (2015) - a 13-channel film installation that pays homage to the tradition of artists manifestos, played by actress Cate Blanchet. The film version of Manifesto will have its Nordic premiere at the Göteborg Film Festival on 2 February 2017.

Birgit Johnsen (b. 1959, Aarhus) and Hanne Nielsen (b. 1958, Aarhus) is a Danish artist duo working primarily with video, documentary and installation. They live and work in Aarhus, Denmark. In the early 1990’s they graduated from the Jutland Art Academy and started working together in 1993. They examine our social behaviors and subjective relationships with both general historical issues and the different cultures we are part of. Hanne Nielsen & Birgit Johnsen have exhibited in countries like Denmark, China, Germany, Norway and France. Recently they participated in the exhibition Watched! Surveillance, Art and Photography (2016) and had her first major monographic exhibition Inclusion / Exclusion (2014) at ARoS Aarhus Art Museum, Denmark. Their work is part of museum collections such as Bonn’s Art Museum, DE, ARoS Aarhus Art Museum, DK and the National Gallery of Denmark, Copenhagen. 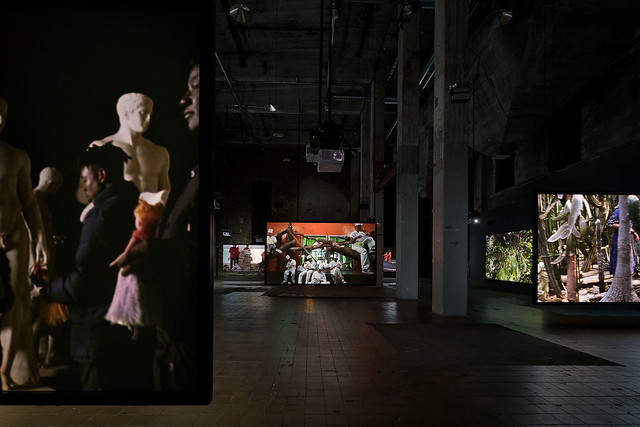 The installation of Asylum is produced in collaboration with Goethe-Institute.