Per Svensson – Alchemy – The All Seeing Eye

Per Svensson worked for many years with a group of artists in the former carbonic acid factory, next door to Färgfabriken in Stockholm, whereas today he has his studio in the former sugar factory in Klippan, in the vicinity of Röda Sten Konsthall in Gothenburg. The video work The All-Seeing Eye, produced specifically for this exhibition, manifests the important role of alchemy in Per Svensson’s artistic practice. Alchemy was the mixing of elements in a creative act, at a time when different areas of knowledge were not separated in disciplines. For Per Svensson, alchemy is to do your own thing, “it is to walk your own path, to trace your own drawing, to not stop the poetry”.
Per Svensson’s art emerges from developing a close relationship between precise scientific observations of nature and poetic uses of natural phenomena. Neither observation nor contemplation alone can decode the mysteries of nature and of being. This dialogue is the starting point of Alchemy – The All Seeing Eye, a broad and generous presentation of Svensson's art practice where architectural installations, video works, artefacts, sound pieces, and more than a hundred drawings offer a glimpse to the artist's creative process.

Artist Per Svensson works in the fields of sculpture, painting, drawing, sound installation, film and architecture. Svensson is educated at The Royal  Art Academy in Stockholm 1985-1990, and again at The Royal Art Academy, Department of Architecture 1999-2000. His works have been exhibited both in Sweden and internationally at Moderna Museet in Stockholm and Malmö, Ystad Art Museum, Lusaka National Museum in Zambia, LACE in Los Angeles, Heliostrum in Köln, The Art Academy in Budapest, The Gothenburg Museumof Art and MHR in Reykjavik, among others.
Alchemy – The All-Seeing Eye was shown at Färgfabriken from 29 September–2 December, 2018.
The book Per Svensson – Alchemy, Art, Architecture, produced by Art and Theory Publishing with support from Kungl. Akademien för de fria Konsterna, Helga Axelsson Johnsons Stiftelse and Längmanska Kulturfonden, will be released on June 12th at the artist’s studio in Kkv, Gothenburg, followed by an artist talk at Röda Sten Konsthall. 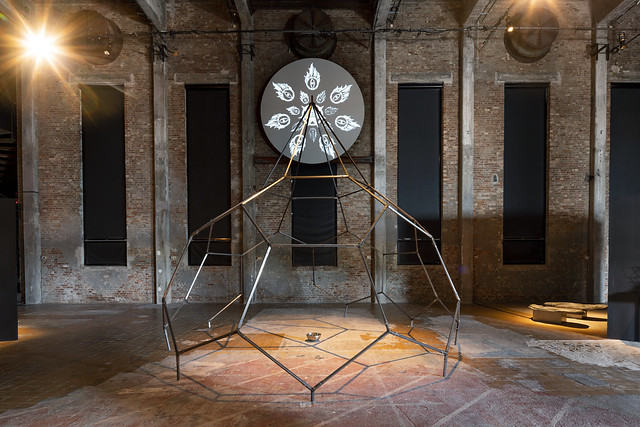