The artists Kalle Brolin, Tanya Busse and Carolina Caycedo will meet in the exhibition Sacrifice, which opens June 6 at Röda Sten Konsthall. An exhibition of three artists who, through their art, establish links between politics, spiritualism, devastation, ecological madness, dating apps and shamanistic struggle.

One would have thought that the instinct of self-preservation would have kicked in, and yet, we (modern humans of this planet) have just carried on watching our screens, worried perhaps, but yet just carrying on. Future generations might ask why if we knew, said and did nothing…

A sacrifice is commonly defined as an act of slaughtering a living being, an animal, a person, or even a river, as an offering to a deity. To sacrifice is to give up something one values, to surrender a much-appreciated possession, even one’s own life, as a gift to something considered larger and greater. A sacrifice is done in exchange of benefits, such us prosperity or the continuation of the species.

The global powers of the West have created a series of sacrifice zones that extend across the continents of the Americas, Africa, and Asia, reaching across many sites in Europa, including Scania and up to northernmost Scandinavia. These zones are geographic areas permanently damaged by environmental destruction or economic disinvestment, marginalized places that bear the burdens of industrial capitalism. The well-being of both humans and ecosystems are compromised, through decisions taken by outside agents following abstract and illusory notions of “progress” or “development.” Mines, agro-industries and hydropower structures are just a few examples of such projects known to create sacrifice zones, schemes that arrogate for themselves the right to subject all forms of living, human and non-human, to its own terms, or worse, to non-existence.

The exhibition Sacrifice presents practices concerned with environmental catastrophe, extractivism and the transformative work of social resistance that call attention to other ways of existing that think-feel with the Earth. Combining moving images, sculpture, photography and sound, Kalle Brolin, Tanya Busse and Carolina Caycedo have crafted unique axes of meaning and points of intersection linking politics, devastation, ecology, life cycle assessments and minerals (some named after love goddesses) with the flows of life, from dating apps to spiritualities, mythologies and the struggles of noaidis, indigenous communities, peasants and nuns against the colonial-capital machine.

In her work, Carolina Caycedo addresses the effects of large dams on landscapes and societies in American bio-regions, tracing the transition of rivers, public bodies of water, into privatized resources. Her “Water Portraits”, as she herself refers to much of her work, are an invitation to revise modern understandings of nature which separates humans from the surrounding ecosystems. In Kalle Brolin’s collection of images and quotes, the ecological impacts of mining the mineral vanadin in Scania—used in batteries allegedly needed for a transition to a fossil free future—is complexly related to the social impact of smartphones and the possibilities that dating apps represent in terms of love and fertility. In Tanya Busse’s work, a “black substance” sourced in the city of Kirkenes in northern Norway, is the protagonist. The substance is iron ore, a mineral whose extraction drastically transforms natural environments through open pit mining, but being the main metal in producing steel is needed for infrastructure, ships, automobiles, machines, and weapons. However, despite the toughness of steel, combinations of sacred plants that grow in the vicinity of the mine might be enough to “shake the modern day war god to its knees.”

The works presented in Scarifice offer knowledges produced from the relation to the earth, not the separation. They bring forth the practices of those struggling in its defense, in the negotiation of material and spiritual realities in our only planet. Their sets of propositions encourage existential resistance against the dominant forms of capitalist modernity. As the sociologist Arturo Escobar points at, “we are facing modern problems for which there are no longer modern solutions”. The knowledges produced from territorial struggles happening in various places around the world, provide us with new elements for thinking about the profound cultural and ecological transitions needed to enter into a sustainable future. These works by Kalle Brolin, Tanya Busee and Carolina Caycedo, remind those of us existing in the densest urban and liberal worlds that we, too, dwell in a world that is alive. They invite us to reimagine ourselves as belonging to the stream of life, attuned with the needs of the Earth.

Kalle Brolin is an artist and a writer, working with video installation and performance. His latest series of works, on the landscape and culture of the coal mines and sugar factories in southern Sweden, has been exhibited at Malmö Art Museum and Moderna Museet in Stockholm. These works are also shown in an extensive tour of exhibitions and screenings throughout these mining- and sugar towns of Scania. He is based in Scania. Kalle Brolin graduated with an MA in Fine Arts from Umeå Art Academy in 2004.

Tanya Busse works across mediums of moving-images, installations and photography. Her practice boasts the synthesis of nature often combined with an industrial, post-human presence. She is interested in deep-time, invisible architecture and how power is produced and articulated through material relationships and histories of place. Originally from Moncton, NB, Canada, she is currently based in Norway. She studied at NSCAD University in Halifax and Kunstschule Berlin Weissensee in Germany and holds a master’s degree from the Academy of Art in Tromsø.

Carolina Caycedo participates in movements of territorial resistance, solidarity economies, and housing as a human right. Carolina’s artistic practice has a collective dimension to it in which performances, drawings, photographs and videos are not just an end result, but rather part of the artist’s process of research and activism. Caycedo is a London-born Colombian artist, living in Los Angeles. She studied at Los Andes University, Bogotá (BFA) and Roski School of Fine Arts University of Southern California (MFA). 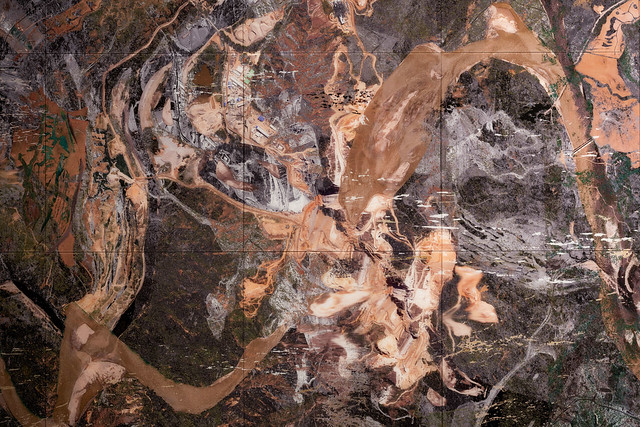